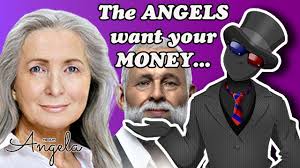 Is Angela the angel medium a Scam or Trusted Psychic?

In our series of reviews we came across another psychic that we´d like to present to you. Her name is “Angela, Medium of the Angels,” who also goes by a few other names, such as “Guardian Angel Messenger,”  “Medium Angela” and “Angela Guardian Angel.”

Similar to the other psychics, we have reviewed already, Angela calls herself a highly gifted clairvoyant.The biography on her website is not too far out, so she might as well be a really good psychic. According to the description, she has been working as a psychic for 40 years and has a close connection to the angels. At age 7, she had a near-death-experience in which her Guardian Angel saved her from a three-day-coma. Since then she can communicate with the angel realm and light beings. It´s her mission to help other people with her special gifts and connect them with their life purpose. Fair enough.

Her biography could apply to many genuine psychics, so it´s not really a red flag. Many psychics have a close connection to Ascended Masters and Angels, that´s where they receive their information from. However, when we started to investigate a little further, the suspicion of a scam became stronger.

“Angel Medium Angela” claims to give free readings, which we know by now are hardly ever free. You can´t request a direct reading from her via her website. The only option you have is to leave your email, receive a free reading and then follow a link or a call to action, to purchase an in-depth reading for a specific amount of money. Though the website looks personal, there is no way to reach her directly without a free reading at first.

With all psychics we have reviewed so far we had the same issue. If they offer a free reading, they usually end up harassing your via email sending you all sorts of scary messages about curses and misfortunes that´ll befall you. You are then prompted to buy a reading that will help your reveal the source of the curse and allow you to release it.

Most of the time these messages are very generic and could apply to anyone. They don´t contain overly personalized details, nor do they prove that the psychic truly has a gift.

The problem with the fraud psychics is that they claim to read your energy, even without your permission, and then go on offering you all sorts of readings and healings for a high fee to release something from, you were not even aware of in the first place.

A genuine psychic with a busy practice will not have time for that. They´ll be so occupied with helping people, it wouldn´t enter their mind to check other people´s energy without permission.

The more vulnerable readers might respond to such emails, but if you get a lot of them, you simply become annoyed and question their integrity.

If you find a true psychic, you are the one contacting them to ask them for help and only then they are allowed to read your energy and give you advice.

A Marketing Company behind her

The next thing we noticed about Angela is that her digital marketing is run by a marketing company. This could be the case, if she decided to outsource her online presence to them, but it could also simply mean that she is fake and doesn´t even exist! Same as with the other psychics, it´s hidden in the Privacy Policy and Terms & Conditions.

Medium Angela is the creation of Kandinsky and Partners Ltd. The company is registered in two different countries, which are both known for money laundering and tax avoidance issues.

As we mentioned before, Hong Kong as well as Gibraltar are dodgy places to do business. It´s questionable that whatever the business does there is legal. Hong Kong doesn’t need to follow the Chinese Law and Gibraltar is a place to avoid taxes.

Furthermore, the address listed for Angela is the same one that has been listed for the scam “Medium Maria,” who we also reviewed before. Although the companies represented at the address are different, it seems to be the place for digital agencies to set up websites selling psychic services, which are not based on real people.

The psychics present themselves with a catchy biography, are only reachable through a free reading and then start to bombard you with endless emails that are based on manipulation and scare tactics.

As we have seen with Psychics like “Extraordinary Ron,” “Medium Maria,” “Chris Voyant” and the like, their tactics are quite the same. They don´t respect your privacy and won´t let go until you buy a reading. Non of them is ever present in person and you can´t trace their biography.  There is nothing to back up the claims they make about their gifts and their history. Most of the time reviews about them are quite negative, although some also have a following of loyal reviewers (which might be fake though).

A massive red flag that stands out for us is that “Angela the Angel Medium” is represented by a marketing team that writes emails and marketing collateral for her. It is not clear what she writes herself, when she tunes in with the angels for each person and what on the other hand are generic messages.

When requesting a free reading from “Angela the Angel Medium”, she not only sends the free reading, but also pressures you to buy an in-depth reading. Since she sensed that you are bound to a spell or a misfortune soon to come, she needs to give you more details for which you have to pay to get all the juicy information!

Even if Angela existed, it would be difficult to find out where she lives and since when she runs her business. There is no way to verify her existence, nor any positive reviews to back her up.

The price is $69, exactly the same as for some of the other psychics mentioned before. When you pay for the reading, she performs a ritual or a spell to release you of your burden and turn your life around. However, if you don´t buy asap, the price would switch to her normal offering price, which is $129. Non of these prices are visible on her website though, so if you wanted to request a reading right away, you wouldn’t be able to.

If you don´t respond, she will keep on messaging you, always with the same underlying tactic of blackmailing and pressure.  Her attempt is to make you believe something bad is about to happen, if you are not going to be saved by Angela.

We didn´t use her services, expecting the same nonsense that we have seen from other psychics that came readymade from marketing agencies out of Gibraltar or Hong Kong.

What might be working with other people, is not working with us anymore. We have been scammed before, we have also tried some psychics on purpose just see what they tell us. Angela is so similar to other scams, we wanted to save us the money and the time here.

A reliable psychic will not pressure you, nor will they consistently send you emails assuring you how bad your future will look like. They give genuine advise, when asked for, which includes positive and negative. Assessing your energy field and your future without your permission is already a violation of the code of ethics and manipulative behavior that will backfire to them one day sooner or later.

On Angela’s website you can find a section about how to claim your refund up to 30 days after your reading was sent to you. However, same as with “Extraordinary Ron”, “Chris Voyant” and “Medium Maria”, you can’t claim this money.

A long list of negative reviews about Angela speak for themselves. Most of the people are upset about having payed for her services that were of poor quality, then asked for a refund, but never heard of Angela again. Only a few actually got their money back, but that was the minority. They might have persisted longer though.

The next big alarm bell is, that some people even reported having money withdrawn from their accounts without having received another reading from Angela. They could not remember having given permission to withdraw money on a regular basis.

Most of her clients were very unhappy about the quality of the readings and simply did not take “Angela Medium” seriously any longer. Some people tried to validate her readings with two different emails and got the exact same response.

Which goes to show that there is no Angela contacting her Guardian Angels to give you a reading, nor to give you the name of your Guardian Angel, but it´s a marketing agency having set up automated email responses to generate passive income.

For all the reasons listed above, Angela is clearly not a trustworthy psychic. Most likely she does not exist and a marketing team is running all campaigns for a fake persona.

We´d recommend you to do your research, when booking a psychic reading and only book with verified trusted people. Check that they have a history of working with satisfied clients and positive reviews to back that up.

A psychic reading can connect you with your Soul, your passion, your true love and the miracles of the Universe! You don´t want to miss that, so hands off from Angela Medium and any other of the psychics mentioned above!

Save your money for a real psychic and stay away from “Angela the Angel Medium”!

72 Replies to “Angela The Angel Medium, Scam or Trusted Psychic?”