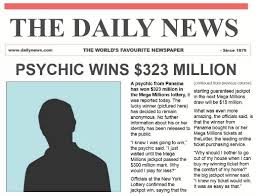 If there is one thing that we all wish we had more of, it’s money. Given the opportunity to rub a magic lamp, nine out of ten people would ask for winning lottery numbers. Without magical assistance, the odds of correctly predicting the winning numbers are roughly 1 in 290,000,000. But what if you had psychic help? Could a clairvoyant make you an instant winner?

Clairvoyants work with living energy, they read your field and interpret what they see to provide advice for your career, love life and to answer any specific questions you have brought to the table. A living mind does not generate lottery numbers. They come from the brain of a machine, making them inaccessible to the psychic’s abilities.

Ask a psychic “what numbers should I chose for next weeks jackpot?” and you’ll find the answer disappointing. They can’t guarantee you success, but they can offer to reveal you’re lucky numbers for use instead.

A more useful question to ask is “are my finances going to improve?” and “is there anything I should know that can help?”. That’s is not a loophole for collecting the winning numbers, but it can provide the kind of insight you need to create a positive flow of income that will improve your financial situation.

When people seek the assistance of a psychic, the underlying reason is generally hope and reassurance. Wanting to win the lotto can be a sign of financial distress. Money worries are a common concern in readings try asking for guidance with your situation.

Becoming financially stable on your own is a slower process, but learning how to take charge of your accounts is ultimately more rewarding. There is the satisfaction of achieving a goal and empowering yourself with knowledge and discipline.

A psychic may not be able to predict winning numbers. Still, they can foresee a happier you, financially abundant or winning a prize in the future as was the case with Carolyn O’Brien, who won 3 million dollars in 2017. As O’Brien was leaving a reading, she was stopped by her psychic who describes her holding a large cheque and cheering ‘I did it’. Shortly after, when O’Brien got the prize on a scratch ticket, it all unfolded just as the reading had predicted.

Readings anticipate your future pathways based on your current energetic state. Estimating the exact numbers to pick or where to buy a scratch card from is to difficult as the future is in constant motion and the critical information comes from non-organic matter which a psychic is unable to touch.

The proof is in the pudding as they say, and if psychics could accurately intuit how to win the lottery, they would all be rich! When a psychic connects to a vision, they only see a potential reality, and the numbers are drawn at random in an ever-evolving future.

There is also individual karma at play, and if it’s not favourable to your personal development, the universe may intervene. A person with energy aligned to abundance will intuitively know what to play, even if they don’t usually think about buying a ticket. The universes highest aim is to support your growth even if that means making things tough for a while.

Another factor is the range of the clairvoyant’s supernatural abilities. Each medium is gifted with different talents the same way some artists are better painters than sculptors or musicians rather than poets. Clairvoyants may specialise in a tarot reading, palmistry or connecting to angelic realms. Though they might not like to admit it, not everyone can see numbers clearly,

Many clairvoyants are reluctant to look as they feel it would be an abuse of power that doesn’t serve the greater good. Their job is to provide direction and support on the road to fulfiling your potential.

While striking it lucky may seem like the answer, there is also a dark side. It’s not uncommon for winners to become alienated from all of their friends and family. Some use up everything in a relatively short period, quickly ending up back where they started.

That doesn’t mean you shouldn’t have a go, especially if you feel a strong positive pull to do so. But before you race to a reading for confirmation, stop and think about the value you have to add to the world. Maybe the best question to ask is, should you start a new venture or request a promotion? Is it time to start a side project or get serious about the thing you love?

Check-in with your gut and your heart to be sure that your actions are aligned with your beliefs, because the true key to success lies within you.