What is the American Federation of Astrologers? 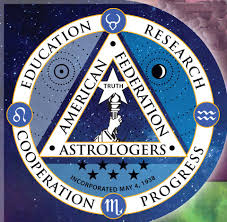 As Carl Sagan famously stated, we live, “on a mote of dust suspended in a sunbeam”. In the inky black darkness of space, our little planet is surrounded by overwhelmingly large planets and millions of stars. When we look up at night, we can see the glittering milky way scattered across the sky. The moon illuminates the dark while shooting stars, like cosmic fireflies, flicker up above. For centuries we peered into space watching, searching for meaning in the heavens.

When our ancestors began notice cycles and constellations in the cosmos astrology was born. Astrology is the ancient art of tracking and interpreting the influence of stars, planets, the sun and moon on our individual and collective lives. Using complex mathematics astrologers are able to plot birth charts which reveal insights into patterns of behavior, the impact of planets on specific areas of your life such as; career, finances, relationships, love.

It has deep roots in our collective history which were further strengthened on May 4 in 1938 when Catherine and Ernest Grant founded the American Federation of Astrologers (AFA).

Ernest and Catherine were both passionate astrologers who founded the AFA when they realized there was a growing need for a professional organization for astrologers, that could set standards and legitimize the practice of astrology.

At that time, numerous laws made against fortune-telling were preventing astrology from being taken seriously as a legitimate profession. And so in an attempt to save astrology from the disdain of its detractors, Catherine and Ernest rallied together with Anna May Cowan and Swen Erickson to form the AFA.

Ernest Grant left his job to devote all his time and energy into the federation. With the help of his wife, Ernest wrote a set of astrological textbooks. Designed to support individuals who wish to study astrology, these books share practical techniques for students and professionals.

With the development of these landmark textbooks came the founding the National Astrological Library. The library is both a publishing house and retail outlet that was owned by the Grant’s until Catherine eventually sold it to the federation after her husband passed away in 1968.

The library and publishing house has remained with the AFA and is one of the foremost publishers of astrological literature in the world. Not only has it worked to promote new and emerging authors the National Astrological Library is a leader in its industry for reprinting many out-of-print and often very rare works from the early 20th century in high-quality new editions. It is also well known for producing translations of Morin’s Astrologica Gallica which was first published in the 17 century.

The AFA was the first astrological institute to develop and implement a certification program for astrology. The federation values professionalism, integrity and education, which is why the AFA continues to provide, learn at your own pace correspondence courses to this day.

For astrology lovers who want to know more in-depth information and learn how to create a natal chart or for those seeking to start a business, the AFA has formulated the Superstar Course. Comprised of 22 in-depth lessons the Superstar Course explores everything from, active planets to the 12 signs of the zodiac to natal chart delineations and transits.

Because the AFA is focused on encouraging astrologers to learn and grow, they also offer membership to the federation. When you become a member, you are joining one of the largest astrological organizations and publishers in the world.

Membership is open to everyone with different tiers to suit each person’s level and interest. Whether you just love astrology or are a serious researcher, the AFA has a place for you. Some perks of being a member include access to the prominent publication Today’s Astrologers plus educational resources and the chance to be part of a curious, engaged community.