What is the Barnum Effect? 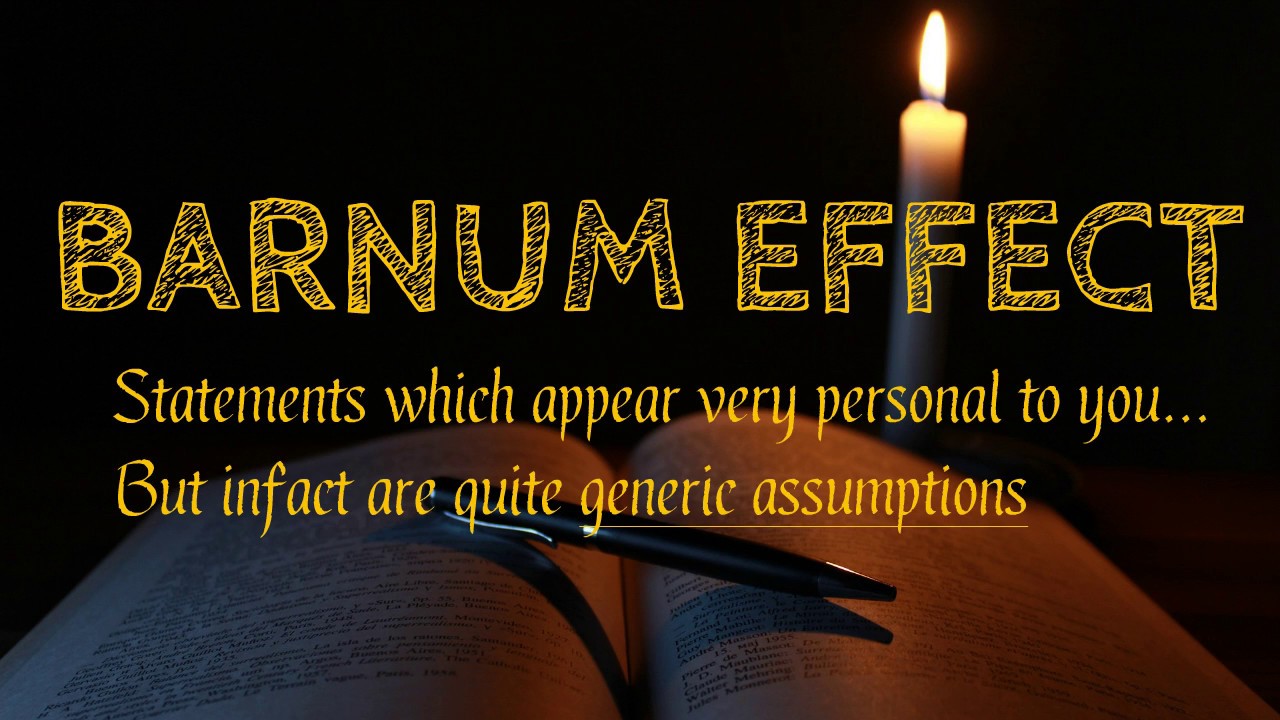 Psychics and The Barnum Effect

Anytime you watch a magic trick you are left wondering how it is done. You want to believe that this person has that special gift but at the same time, there is a strong need to discover exactly how it is done. Psychic readings have the same effect.

There are people in the world who have a genuine ability to read people. They are extremely intuitive, and you could even say they have a sixth sense. Though it probably comes naturally, they also make an effort to develop their ability but practicing various spiritual techniques.

There are others whose psychic abilities aren’t quite up to the same standard, yet they still seem to be able to accurately read people. These people are often good at putting on a show, and like the magician, will rely on a good performance to wow their audience. Nevertheless, this doesn’t explain how they do it.

What Is the Barnum Effect?

The Barnum effect is a psychological phenomenon where general characterizations are given to a person who sees them as being true to them, yet in reality, they could be true for absolutely anyone. If you went to a psychic reading and someone told you that you had some difficulties in your life, you are more than likely to say yes—who hasn’t. But as the psychic has got this right, they have convinced you of their abilities.

It’s worth noting that the Barnum effect was named after Phineas Taylor Barnum, a circus man and master psychological manipulator. It is sometimes called the Barnum-Forer or less frequently, just the Forer effect.

The Barnum effect has been tested in what’s also known as the classic experiment, first carried out by psychologist Bertram R. Forer. He gave 39 of his students a personality test to complete and the following week he told them all that he had prepared an individual report of each of them.

They were given 13 statements, for example, “You have a great need for other people to like and admire you”, “You have a tendency to be critical of yourself”, and “Some of your aspirations tend to be pretty unrealistic”. The students gave Forer an average of 4.30 out of 5 for accuracy. The statements had actually been taken from horoscopes. But each of the statements was general enough for the students to find some kind of personal connection to them.

For the Barnum effect to have an even greater impact, the statements is should be in the positive or at least end in a positive. This is because people are more likely to believe the positive over the negative, especially if it related to their personality.

Do Psychics Use the Barnum Effect?

In short , the answer is no. As we previously mentioned, psychics use their profound intuition along with other techniques like palm reading or tea leaf reading to interpret messages. Showmen and women, on the other hand, do use the Barnum effect.

There are even people who provide advice on how better to pull off the cons while using the Barnum effect. The ability to come across as confident in your statements will encourage others to be swept into the belief.

The use of ‘props’ such as crystal balls and Tarot cards will also help the audience believe the validity of the statement. Again, the more confident on is with the tool the more money they are likely to make. It also helps if the scammer is able to pick up on details from the audience that allow for more specific statements. Certain types of jewelry like engagement rings, colors, even someone’s accent or use of vocabulary can give away information. Body language and subtle reactions to statements can give a seasoned con artist further signs on what generalization to say next. This is also known as cold readings.

It’s even easier to convince someone of a psychic ability when you research the latest statistics, trends, and surveys. The recent health pandemic has provided plenty of opportunities. General statements relating to poor health in the family or cancelled travel plans will apply to most of us. When the combine the pandemic and one of the most common reasons for seeing a psychic is to ask about money, financial stress is another subject that many will nod their head to.

The Determination to Believe Despite the Evidence

The media has proved endless cases of psychic fraud where people have lost hundreds if not thousands. Yet, we still believe. Studies have shown that whether we choose to believe or not isn’t down to our level of education but more in the way we think. Believers tend not to be analytical thinkers and prefer to view the world from a personal perspective.

Non-believers will continue to use stories, fake news, and conspiracy theories to highlight how gullible the believers are. Believers will find their own way to justify their opinions. Let’s face it, can anyone explain how even the Simpsons have managed to make 30 accurate predictions. In 2000, Lisa mentioned the mess President Trump had left them, 16 years before he took office, or the NSA Spying Scandal as another of the show’s accurate predictions. Predicting the right winner of a sports game might be a coincidence, but the exact score leads you to wonder if the Simpsons creators have their own psychic reader.

Knowing that there are ‘psychics’ out there who use the Barnum effect and cold readings only means that we have to be more aware of the psychics we choose to visit. If your intention is to have fun, then it will probably be amusing to see the theatricals this type of reading. You can look out for the general statements, the compliments and the drama.

If you are turning to a psychic because you are in need of help and direction in your life, you can’t afford to waste your time or money on these types of mind tricks. If for any reason you feel that your psychic is using the Barnum effect, point this out, see how they react, and then leave. Don’t become a part of their show!