Who Is Jeane Dixon? 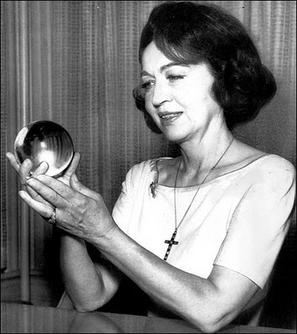 Who Is Jeane Dixon?

The year is coming to an end and despite the global health crisis, the world has not come to an end. Fortunately for us, this is another one of Jeane Dixon’s predictions that didn’t come true. But as one of America’s most renowned psychics, Dixon must have got some people’s attention with some accurate predictions.

Dixon’s talent was spotted at a young age. Her mother took her to see a gypsy soothsayer. The fortune-teller saw Jeane’s gift for prophesying and her mother continued to encourage Dixon’s abilities. She married James Dixon and helped him with his real estate business. This is when she started to gain a local reputation for accurately predicting people’s future and future events. As the soothsayer predicted, Dixon soon started predicting the future for famous people after her nationally syndicated horoscope articles were published.

Jeane Dixon paid a visit to President Roosevelt in 1944. Leaders all around the world were trying to find solutions to bring World War II to an end. Roosevelt turned to Dixon for help with personal issues and apparently military decisions. Dixon predicted that the war wouldn’t continue past the middle of 1945. Germany surrendered in May 1945, thought the war wasn’t officially over until September. Still, this is rather accurate.

Dixon’s most famous prediction was the 1960 presidential election. In 1956, Parade Magazine published an article from Dixon stating that the 1960 election would be won by a tall, young democrat. She also predicted that he would die or be assassinated while in office. In 1960, John F. Kennedy won the 1960 election and 3 years later, he was assassinated.

Richard Nixon also decided to use Jeane Dixon during his presidency. They met in 1971 and Dixon predicted terrorist attacks in the US in 1972 (the same year as the Munich Massacre). Some have said that Nixon’s meeting with Jeane encouraged him to form a counterterrorism committee.

Oprah Winfrey received a prediction from Dixon when they met in 1977. She told Oprah that she would have a huge career and millions of fans. Just 9 years later, Oprah became the first African American nationally syndicated television host.

There are a couple of other predictions that Dixon made, and you could see an element of accuracy in them. She predicted “the coming of a great plague in 1978 and well as a massive shipping accident in 1989. These predictions correlate with the AIDS epidemic and the Exxon Valdez oil spill with 11 million gallons of oil killing hundreds of thousands of animals. And 4 people in the cleanup operation.

Whether using her crystal ball or receiving visions during prayer, Dixon had a significant number of inaccurate predictions. Her visions of the Egyptian pharaoh, Queen Nefertiti, would bring out a world free from war and violence thanks to a new Messiah. This was supposed to occur in 2000.

It’s also worth mentioning that Dixon either changed her mind or had a new prediction regarding the 1960 election. As the election came closer, Dixon predicted that Nixon would win—so really, she had both bases covered.

According to Dixon, World War III would break out in 1958. Fortunately, she was wrong about this. She also predicted the Soviet Union would land on the moon before the US and that there would be a cure for cancer in 1967. We also need to watch out for Jesus returning to defeat a false prophet between 2020 and 2037 as well as a war between China and Russia that China will initiate and win.

What Is the Jeane Dixon Effect?

There are two possible explanations for this. Jeane Dixon was extremely popular with Christians because of her close relationship to God. In fact, she often said that her prophecies were messages from God. It can also be explained by Dixon’s ability to very carefully select the interviews she did and the words she used.

The media played a huge role in the Jeane Dixon effect. She received extensive and continuous coverage with regards to the Kennedy Prediction. Her death in 1997 sparked a new wave of the Kennedy prediction splashed on front pages. Few obituaries spoke of the rise of terrorism instead of the peace we were all waiting for after Dixon’s prediction.

It’s rare to find a psychic that hasn’t published a book. There are 9 books, 8 of which were written by Dixon and 1 co-written with Rene Noorbergen. Dixon’s biography is a best-seller while others are in a more specific niche, such as Do Cats have ESP? and Horoscopes for Dogs. Then there is Astrological Cookbook! She also wrote an entire book on her JFK prediction, Kennedy Confidential: the complete unbiased story.

Regardless of Jeane Dixon’s accurate and inaccurate predictions, we are always respectful of the dead. Dixon died of a heart attack in 1997 aged 79. Is there any harm in focusing on her accurate predictions and letting the false ones slide?  Her final prediction is certainly not